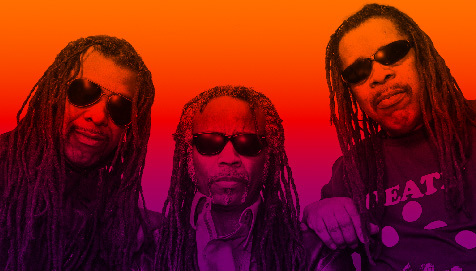 DEATH AND TEXAS! ELSEWHERE: THERE'S A RIOT GOIN' ON!

Remember the Alamo? The Texas Revolution? If you do, congratulations: you're the oldest living human being on Earth! Sure to cause fewer casualties than those historical events but guaranteed to be equally as thrilling, Texans should prepare to experience a little more Death! Pull up your boots and strap on your spurs, Detroit proto-punk legends Death are headed to the Lone Star State once more next month!

In the eight years since the rediscovery and release of their classic, proto-punk, never-saw-the-light-of-day LP, ...For the Whole World to See, Death have been anything but stagnant. While some legendary groups might simply sit back and cash in on their resurgence (we'll be grateful when you're Dead!), Death have spent their time not only toured the world, but also releasing more material- from the archives, sure (Spiritual, Mental, Physical and III), but also freshly written and recorded, like the songs on full ROCKIN' display via the recently issued, N.E.W.! Their explosive live show, surging with energy and passion for pure rock and roll, is a total force to be reckoned with and exemplifies the band's remarkable, vigorous quest for longevity in Death!

Death's revelatory vision for rock, with its frantic punk core, continues to capture fans young and old alike! Now bend into shape and start packing for a trip to Tejas. Or hey, why not sweet home Chicago? Cause Death will also be there, tearing it up at Riot Festival in September. New tour dates are still on the horizon; remember, Death is always closer than you think!