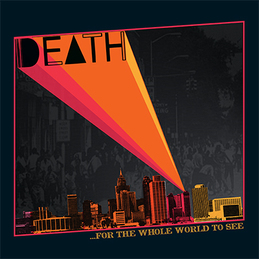 ...For The Whole World To See

Death is the three Hackney brothers, fueled by the raucous sounds of Iggy & Co., creating their own take on the emerging sounds of punk. Socially conscious lyrics mixed with a sky-cracking combination of guitar and vocals, all recorded in raw fashion with little in the way of polish. Seek Death, my children!

Here's what a couple of prominent recording artists say about Death's ...For the Whole World to See.

"The first time the stereo played "Politicians in My Eyes," I couldn't believe what I was hearing. When I was told the history of the band and what year they recorded this music, it just didn't make sense. Ahead of punk, and ahead of their time."

"These dudes were pre-Sex Pistols, pre-Bad Brains, pre-all that shit, and nobody knows about them. I don't understand how the world could forget them."

Christmas comes early! Death waits for no holiday! ...For The Whole World to See is your item of the week.