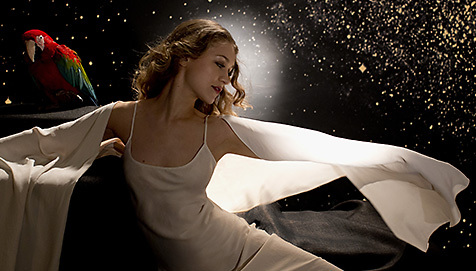 NEWSOM NEWS WILL REVIVE YOU!

Yes! Just as the inimitable Joanna Newsom is about to kick off her first North American tour in over four years, a sprint which takes Joanna and band all over the East Coast and Midwest in support of Divers, we’re bombarding you with new delights to add to your datebook and travel guide. Whatsit, then? Glad you asked: in chronological order, a second New York show has been added to the immediately pending East Coast trip; Japanese tour dates are now a reality; and the US' West Coast gets a whole tour of its own! For all of these performances, Newsom brings a full band experience - to shed massive light of all shades on the meticulous workings of Divers and the exquisite Newsom catalog in a live setting!

It's all part of the Newsom life-style - with 2015's most anticipated release fresh outta the bag, Joanna's already taken major cities in the European Union, appeared on Later... with Jools Holland, and given Larry King a li'l harp lesson - that lands on The Late Show with Stephen Colbert on Tuesday, December 8th! And let's not forget those epic couple of videos, for "Sapokanikan" and "Divers", that've clogged feeds and boosted morale the world over since this whole thing began back in August. With that, 2015 is ending just right, yet 2016 brings us more still! Things rev up once again this Sunday in Boston, so while you wait for the Divers tour to hit your zone, feel free to take a sec and bolster your own lifestyle, particularly in the areas of essential listening and/or gift buying, as Newsom classics Ys and The Milk Eyed Mender are back in stock on vinyl (and if you need a size-appropriate stocking to stuff them in for your special someone, remember the Newsom tote bag! Never forget... the tote bag!)! All the proof's in the tour dates, below!