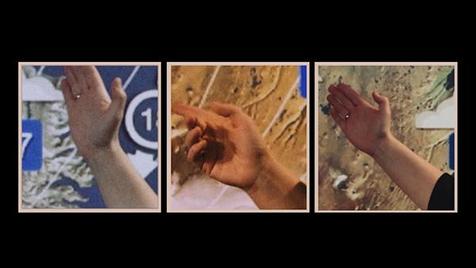 Hex it up! Behold the righteous combination of Neil Michael Hagerty and The Howling Hex AND Fred Armisen! No, we're not talking about some unholy musical collaboration, but instead an audio-visual partnership of mega- (and maybe even meta-?) proportions! Comedian/actor/musician and international jet setter extraordinaire, Fred Armisen, recently journeyed to the Land of Fire and Ice (....Iceland, kids.) and we can prove it! The music video for the new Howling Hex single, "Mountain," showcases Armisen's trip to an Icelandic news station with the same energy and potency as the song itself!

Fred's agile direction features razor-sharp cuts, repetitions and loops, highlighting the mile-high energy assault, swift percussion and searing sting of Neil's six-string gymnopodie while meeting the "Mountain" in its own aerie! The return of Neil Hagerty and the Howling Hex is extra-glorious with Fred Armisen's idiosyncratic visual stimulation - "Mountain" is bound to elevate your senses.

Unusual and unexpected - which is exactly what you don't want to expect, can you dig it? Watch "Mountain" now, and grab your copy of Denver today!

Neil Michael Hagerty and The Howling Hex are also headed to Europe in May for a gigantic tour! Catch them on the dates below and look out for more to come:

May 06 - in Ghent, Belgium at VOORUIT
May 07 - in Rotterdam, Netherlands at ROODKAPJE SUB
May 08 - in Brighton, UK at THE PRINCE ALBERT
May 09 -in Cambridge, UK at THE PORTLAND ARMS
May 10 in London, UK at MOTH CLUB
May 11 - in Leeds, UK at HEADROW
May 12 -in Glasgow, UK at BROADCAST
May 13 -in Preston, UK in THE CONTINENTAL PUB
May 14 - in Brighton, UK at EXCHANGE
May 17 - in Hamburg, Germany in ASTRA STUBE
May 18 - in Copenhagen, Denmark in JAZZHOUSE
May 19 -in Oslo, Norway in REVOLVER
May 20 -in Gothenburg, Sweden at FOLK
May 21 - Aarhus, Denmark at POP REVO FESTIVAL
May 26 - Prague, Czech Republic at KLUB 007
May 28 - Ljubljana, Slovenia at CHANNEL ZERO
May 30 - in Bologna, Italy at FREAKOUT CLUB
May 31 -in Rome, Italy at FANFULLA
June 01 -in Genova, Italy at TEATRO ALTROVE
June 03 - in Barcelona, Spain at PRIMAVERA SOUND
June 05 - in Biel, Switzerland at TBA
June 06 - in Zurich, Switzerland at BOSCHBAR
June 07 - in Geneva, Switzerland at CAVE12
June 08 - in Paris, France at LES INSTANTS CHAVIRÉS
June 11 -in Porto, Portugal at NOS PRIMAVERA SOUND