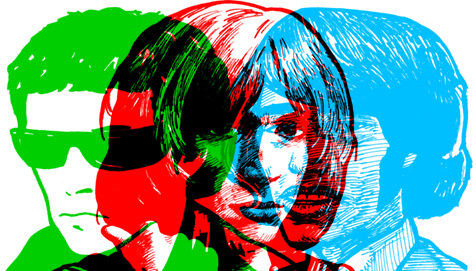 ZOINKS! IT'S A GIFT FROM THE PSYCHEDELIC GODZ: GALACTIC ZOO DOSSIER #10 COMING SOON!

AT LAST! After a 4 year wait, the world's greatest psychedelic, underground, hand-drawn pro-zine is back! Lauded by the likes of international taste-making publications everywhere, Galactic Zoo Dossier returns with a brand new, mind-expanding issue! Painstakingly illustrated by Plastic Crimewave and bad ass contributors from around the globe, GZD is also celebrating its 20th anniversary (fifteen of which have been arm-in-arm with the forces of Drag City)!

Issue #10 of the Galactic Zoo Dossier is the Interview Issue, featuring sixteen interviews with inimitable subjects such as Shirley Collins, Michael Chapman, Giorgio Gomelsky, Edgar Broughton, Arthur Brown and other legends of the blown mind. And, of course, it wouldn't be the GZD without a full set of Damaged Guitar Gods/Astral Folk Maidens trading cards: collect them all, why don'tcha!

As if this wasn't all exciting enough, here's a real BONUS: GZD10 marks the return to that zeitgeisty format originally included with early issues of the Galactic Zoo Dossier - a mixtape, on a real live cassette, compiling totally unreleased magical sounds by Bang, Comus, Edgar Broughton and MORE!!!! This is the largest and most exciting issue yet--mark your calendars for July 22nd!