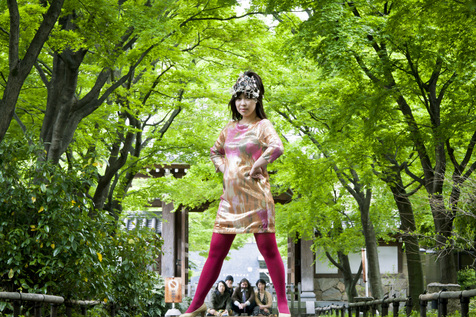 Eiko Ishibashi has made noise both soft and harsh in the Japanese music scene for quite a while - but in the last couple years, her attention has turned to jazzed-up pop songs of an airy, progressive nature - the most desireable kind imaginable! Don't know what we mean? Hm, think Annette Peacock, perhaps? If that doesn't strike a chord, you may wanna rebuild your pop foundation, Jack! Anyway, as we were saying, Eiko has released two of the most masterful and innovative pop albums of the decade - Imitation of Life and Car And Freezer (each featuring input from our Japanese correspondent, Jim O'Rourke) - and just how those records imitate life kinda makes us want to keep on livin'! Hearing is heaven, but seeing is believing, so it's avec great pleasure that we reveal Eiko Ishibashi is leaving is heading west for a full-on European tour this fall!

Featuring the band she created for her records (who happen to play on Simple Songs, too), Toshiaki Sudo and Yamamoto Tatsuhisa, Eiko hits Britain in mid-October. The trip heads south all the way to Portugal before everything is said and done - check out the dates below, put them in your calendar with a bullet, and then reacquaint yourself with Eiko Ishibashi through these tantalizing videos!