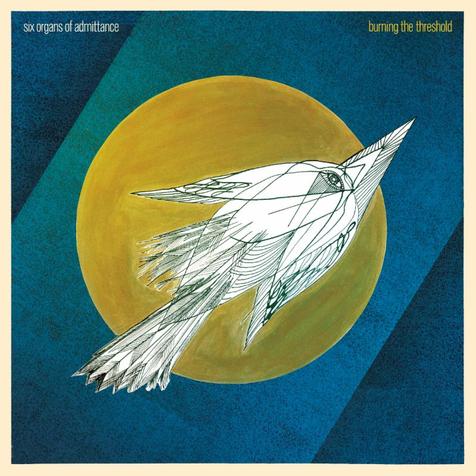 SIX ORGANS OF ADMITTANCE IS SCORCHING INTO A NEW DAWN

In preparing for the first album of non-HexadicSix Organs of Admittance music since 2012's Ascent, Ben Chasny had a think about what he'd be saying in his own tongue for the first time in a half-decade. As ever, a head-full of ideas were driving him to think and speak music as a spirituality superimposed onto a reality, with the ghosts of both whispering at each other. In the end, what sits in our listening ears is the sound of communion. Burning the Threshold brings a wealth of Six Organs-styled lightness into one of his sweetest musical meditations yet.

Ben is in a particularly expansive mood this time around, singing and playing with all the thoughts affixed to a quiver of potent melodies launching forth and arcing out through dimensions, seeking infinite space. This space radiates out from the album's first single, "Taken By Ascent," a seven minute plus burner that engulfs the surrounding realm with empathetic waves. Featuring the thrilling vocal accompaniment of Haley Fohr, the massive drumming of Chris Corsano, and flourishing keys of Cooper Crain, "Taken By Ascent" exemplifies Six Organs of Admittance's furvid push into new and thrilling territory with Burning the Threshold.

With this new music, Ben Chasny has created a potent tonic for our times. Looking at the world through clear eyes beneath a knitted brow, but with a laugh rising up from its heart, Burning the Threshold brings us a powerful draught of essence. "Taken By Ascent" premiered this afternoon on NPR's Songs We Love, but you can listen to it below. Mark your calendars for 2017 in anticipation of Six Organs' special release show in London and the massive US tour that follows!