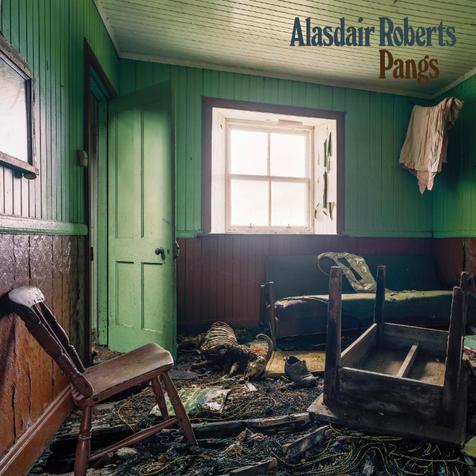 ALASDAIR ROBERTS IS BACK... WITH PANGS!

Over the past 15 years, Alasdair Roberts has released eight albums of self-written material and interpretations of traditional song alike, all played in a diversity of electric and acoustic arrangements, bringing a modern thrust to the music. Following the acoustic austerity of his self-titled 2015 release, Alasdair's applied himself to electric guitar and band once again for his ninth album, Pangs.

Alasdair Roberts and Friends were deep within the epic song approaches of the widely-acclaimed A Wonder Working Stone (2013) when last heard creating music of such scope. While similarly broad in range, Pangs brings different forms of song-craft and modes of collaboration again. Throughout his career, Alasdair has deftly woven his own songwriting with traditional song melodies to create original and personal music. Pangs finds Alasdair in a power trio with his long-time musical partners Alex Neilson and Stevie Jones, and along with guests Debbie Armour, Tom Crossley, Rafe Fitzpatrick and Jessica Kerr, they summon up a powerful - and powerfully gorgeous - storm over ten new songs. With swift drums, sharp and spirited fiddle, electric guitar and even a synthesizer played by Ali, "The Downward Road" is a boisterous introduction to all that Pangs offers! It's one of his most driving pieces of music ever--dare we say, it rocks!

Alasdair's roots run deep and his sound is conversant with the many iterations of the music from the past, but it is simultaneous present and active in our contemporary milieu. This is vitally true of Pangs - the people of today are in dire need of the edification and amusement that Alasdair Roberts brings! Listen to "The Downward Road" below, check out the tour dates and mark your calendars for February 24th, when Pangs is unleashed onto world!

All gigs trio (Alasdair with Stevie Jones and Alex Neilson) except * - solo.