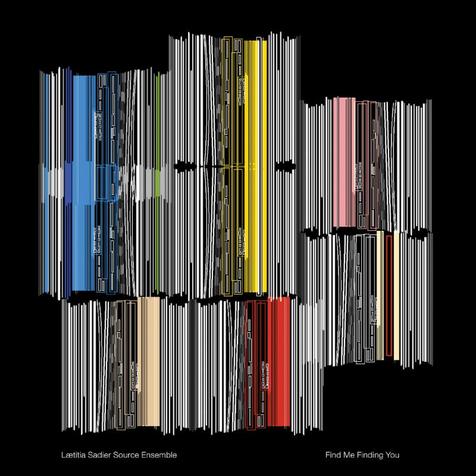 Another New Year, and new shapes are forming - if only we are fortunate enough to notice them! As we spin through this world, we are witness to all manner of combinations unfolding before us - familiar arcs and breaking waves alike, upon all of which it is our choice, our chance and our challenge, to possibly ride. Find Me Finding You, the new album from the new organization called the Laetitia Sadier Source Ensemble, manages to strike new chords while touching familiar keys in the song of life.

From its percolating opening beat, Find Me Finding You locates new systems within the sound-universe of Laetitia Sadier. When we hear synth lines diving, lifting and drifting, unusual guitar textures, the plucked sound of flat wound bass strings or the bottomless pulsing of bass pedals stepping out of the mix with an exquisite vibrancy, this is the sound of the Source Ensemble! This designation implies a new togetherness phase; alongside long-time collaborators Emmanuel Mario and Xavi Munoz, keyboard and flutes parts played by David Thayer were essential contributions, as well as further keys, synths and electronics from Phil M FU and several intense guitar sequences from Mason le Long. The duet with Hot Chip's Alexis Taylor on "Love Captive" (not to mention Rob Mazurek's distinctive coronet playing!) gives voice to an ideological cornerstone of Find Me Finding You - that, should we be responsible enough to endeavor into a world of basic incomes and open relationships, we would make astonishing strides as a society. These sorts of things can only be done in agreement with others.

The first single, "Undying Love For Humanity", announces its immediacy with protracted rhythms and pronounced vocal expressions. Laetitia proclaims power to the people--now! It's a call to arms for the public to recognize and exercise their strength for good, which is just what the world needs now at this moment in time. It doesn't hurt that "Undying Love For Humanity" is catchy as hell, now does it?

Expressing great compassion and expectation, as well as an abiding belief in an underlying unity that permeates and intimately binds all things and beings, Find Me Finding You is set for release on March 24th! Shortly after, in April, The Laetitia Sadier Source Ensemble embarks on a massive UK tour - dates below!

6th at Grand Social in Dublin, Republic of Ireland
7th at Black Box in Belfast, Ireland
9th at Full Moon Club in Cardiff, Wales
10th at Phoenix in Exeter, England
11th at Bullingdon in Oxford, England
12th at Green Door Store in Brighton, England
14th at Trades Club in Hebden Bridge, England
15th at The Crescent in York, England
17th at CCA in Glasgow, Scotland
18th at Soup Kitchen in Manchester, England
19th at Sage 2 in Gateshead, England
20th at Moth Club in London, England
21st at The Lantern in Bristol, England