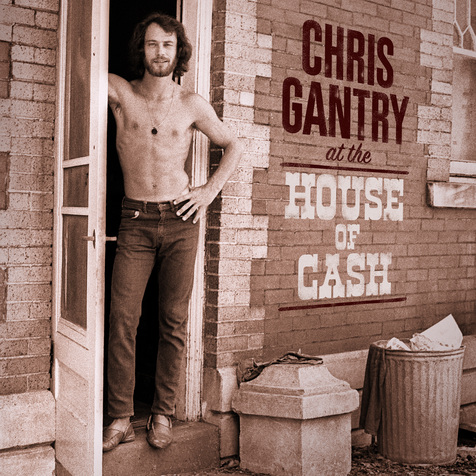 JOURNEY TO THE HOUSE OF CASH WITH CHRIS GANTRY

Chris Gantry's music was always stylistic fusion: his 1967 album debut Introspection sounded a little bit folk, a little bit pop and only a little bit country, with smooth melodies and verdant string charts. But the 60s were afoot, and by the time of Chris' second LP in 1970, Motor Mouth, his approach had radicalized into a wide-eyed, hard-edged delivery. The critics dug it, and Chris played on Johnny Cash's TV show, but the next Gantry record didn't appear for five more years. And herein lies a tale: of dropping out, of a vision-quest and an exorcism of sorts, and of sessions for a bunch of songs so far out from Nashville norms that it's only now they've seen release. This is the story of At the House of Cash.

Settled at Cash's studio in '73 with a band of heavy Nashville cats, Gantry extemporized his songs with sleek self-confidence, even while plunging through the hippie mirror of confusion. High on the waves of the times, Chris had pulled apart the tropes of traditional voice-and-guitar singer-songwriting, pushing them into fevered, eclectic, entirely personal territory. He took in the scope of the freedom generation with whom he'd been riding shotgun, and turned it back out again with unhindered lyrical expressions reflecting both disillusionment and a deep sense of transformation, with deft gestures and songwriting chops nailing down the tunes. Had At the House of Cash seen release in its day, it would have been a shot of earthy surrealism straight into the heart of Music Row.

But the album didn't find a backer, so Chris Gantry shrugged and moved on. He's kept on with singing and writing, doing books and plays too, appearing in Trash Humpers, and three new records over the last few years - but At the House of Cash stands tall with its outlaw brethren from the golden age of Nashville, and it is damn fine having it out in the open air with the rest of us at long last. Out on vinyl and CD on November 17th!