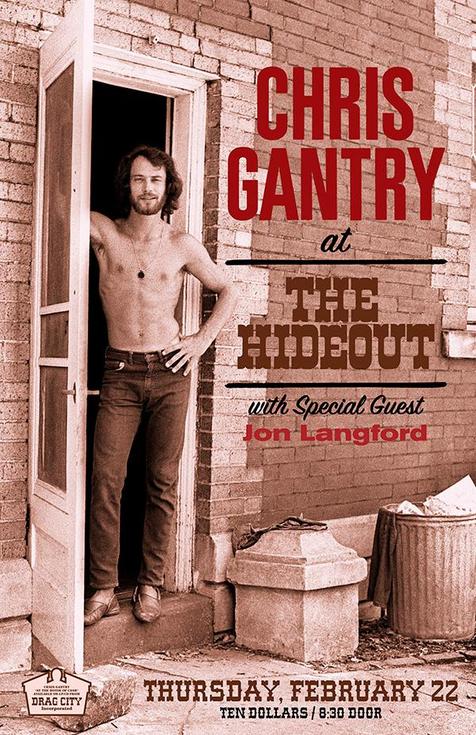 Yes! Chris Gantry's fixin' to give us a whole lotta outlaw love next Thursday, when he brings his acoustic guitar and playful, badass attitude to the friendly confines of The Hideout here in Chicago! It's the first Chicago performance from Chris that we're aware of in our little lifetime, or at least all that can be revealed by our internet machine or Chris' septuagenarian mind! Regardless, this performance is a BIG DEAL as it might be your first and last chance to see this living Nashville legend (with an insane writing catalog including songs made famous by Glen Campbell and Johnny Cash), who's recently unearthed and released At The House of Cash, a lysergic masterpiece of a record made at Johnny Cash's studio (where Chris was living following a marijuana bust in the early 70s), was too far out for public consumption back in the day! Gantry's continued to play out and perfect his sound locally since the '70s, and his exuberant persona has landed him in Harmony Korine films among other things (Trash Humpers) -  as a guy who's spent years palling around with Kristofferson, Silverstein and Cash and spent his life embodying the outlaw country singer, it's gonna get REAL when that supreme energy hits the Windy City! Don't miss out!

Chris Gantry brings his version of Music Row to the Hideout on Thursday, February 22nd (with special guest Jon Langford of The Mekons!); get your tickets before they're gone!