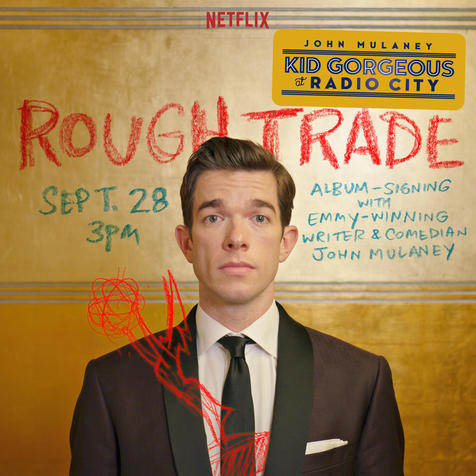 Life is nothing but problems. It is truly mind-boggling! Check this one out - we've got a record dropping next week from John Mulaney called Kid Gorgeous at Radio City Music Hall. Great record, gonna do just fine! That's not the problem. Last night, John goes and wins an Emmy for Best Writing for a Variety Special - the variety special of the same name! And... ahhh! Couldn't this have happened sooner? We already wrote our promotional blurbs! They've all gone out already and it didn't say anywhere that this is an Emmy-winning special. FUCK! And what about the album cover? Shouldn't there be something on there? This is SO UNFAIR. Fortunately, this doesn't affect the signing John's doing at Rough Trade (64 North 9th Street Brooklyn New York New York 11249, phone 718-388-4111) next week. It'll be a great event! Rough Trade is awesome! But in the meantime, what do we do about this album? Why do we live? Ah, we'll figure it out - and meantime, best congratulations to John Mulaney and his team for putting together such a prize-winningly great show. Cheers, Kid!