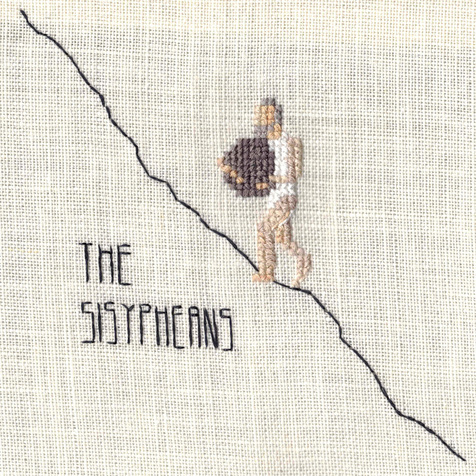 Jim White and George Xylouris have been friends since Jim's early days in Dirty Three. Their musical connection goes back to then and led them to start Xylouris White in 2013. Since then, they have released three albums and been touring the world. The Sisypheans is their Drag City debut and fourth release together.

Xylouris White's fourth installment of progressive Cretan lute compositions present the sounds of the lute, George Xylouris' vocals and Jim White's drums in an open, spacious sound-field. With the philosophical bent that suits their music's ancient headwaters, Jim and George are meditating on the life of a traveling musician, Sisyphyan in its repetition, but inspired in an eternal recurrence of themes and techniques that allow them to climb ever-further into their experience as players.

"As George Xylouris and I traveled around these last five years, we found ourselves talking about Sisyphus. George had a theory about Sisyphus, condemned to climb that hill with that rock forever. George saw him carrying the rock in different ways, in his left hand, behind his back, pushing it with his head while crawling and noticing each journey the seasons changing, the grass and the insects. The meaning was clear and for George it fit with playing the popular Cretan song "Proto Hanoti" many turns each day for his life and discovering it new each time.... I found it fit in with a long held set of thoughts I'd had, that if one concentrated activity and thought enough on one thing it would expand and be a whole world. It sounded like the same idea and also with the idea of first principles, for it to be new each time: that is our job as musicians. We would talk about this as we traveled playing music. One day a waitress heard us talking, and she asked if we knew the Camus essay about Sisyphus. We didn't, but I got it in English and then we found it in Greek and it fit too. When we were playing in Louisville and working on Black Peak, we stayed at a house and saw the artwork you see on the cover, by Elsa Hansen Oldham ... We'd finished the circular trilogy of Goats, Black Peak and Mother and we found ourselves making The Sisypheans. What we do leads us to who we are, the Sisypheans."

Watch the dazzling music video for the first single "Tree Song", directed by Jem Cohen, now and pre order your copy for 11/8!