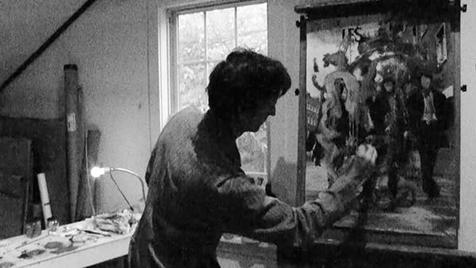 "I wrote this tune inspired by Yuzo Iwata's album "Daylight Moon". I was getting back into sounds like this, loose and noisy...and it seemed like a strange gift to have a modern record sound so good in this way. I was looking forward to meeting him at a show we were playing together in Philly but he was too sick to play it and soon after news came that he had died. RIP Yuzo. The video is based on "Always On Sunday" a short dramatization of the life of Rousseau by Ken Russell. It's hilarious and sad and is narrated by Mr. Sex himself, Melvin Bragg. It might seem like I'm making fun of painters here, but I'm not. It's mostly about overcoming the anxieties of influence and the Beatles being such groovy-tough masters."
--Mike Donovan, 2019

Watch the brand new video for "Iwata-Wise" by Mike Donovan above and grab your copy of the very fresh Exurbian Quonset!