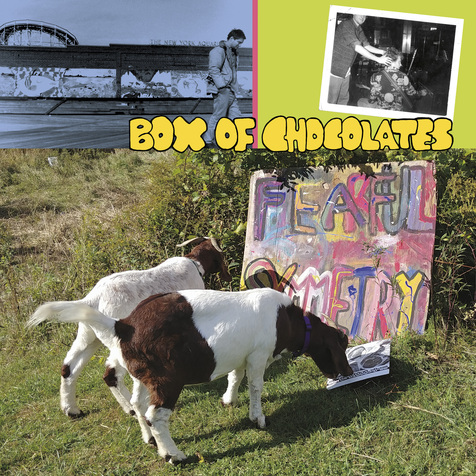 It is as we have dared to hope and fear! Box of Chocolates' seminal Fearful Symmetry has returned to our life.

Fearful Symmetry is a story or record of a group of artistically inclined people who haphazardly found themselves living together and who - toward the end of the arrangement - decided to record the experience in the form of songs written whilst at 140 Plymouth Street in Dumbo." Yes, in Brooklyn. Circa 1990. Already, there's more to the story than you would have known if you'd cracked this particular Box of Chocolates back in the early 90s! With the new artwork, and the inclusion of several pieces that weren't there back then - or even finished back then - this reissue of Fearful Symmetry is a living, growing document of a disorganized and disheveled film cooperative (is there any other kind?), who dared to trace its name in the sands, and have come back to deepen the groove.

The first single, "Stigmatophoria," and "Clarence Thomas Past Lives," which include much of the spirit and some of the bonafides of the initial set of songs, have been inserted for the benefit of all. Some tracks have been reordered too, in places. And the names of the songs' writers, singers and players, including Michael Howe, Will Oldham, Aaron Woolfe (of early Phish-lore), Tony Award-winner Michael Chorney, sound-artist and ethnographer Rob Millis and others whose names we shall not speak - appear also for the first time. Along with a lode of retrospective notes whose expression adds yet another form of entertainment to the package.

As this cast of dozens loft-crashed their way toward a collectively-unknown future, these songs and visions were scrapped together - a loose assemblage of middle-period indie rock, roots-rock pastiche, punk brio, and cinema-fed abstractions, as a suggested soundtrack for the party of your choice. It sounded good and fun - enough so that it still does!

Whether you yourself are new to your youthful journey, far from home or among it, we bring Fearful Symmetry to your life, as a needed bit of psychic Feng Shui. Listen to "Stigmatoria," hear that familiar voice, and spin it on: Fearless Symmetry drops on June 12th!

Artists in this story: Box of Chocolates