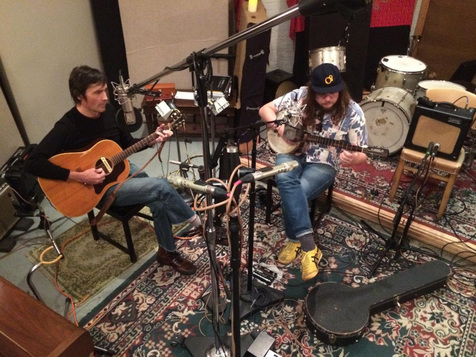 BILL AND NATHAN WILL SEE YOU NOW, GOD

Upon first blush, Keys, the debut album from Bill MacKay and Nathan Bowles, is a collection of guitar and banjo duets — but from the get-go, it also clear that their agreed-upon duo is also a living organism, growing ambitiously within itself as it plays. Diversity of song is matched by instrumentation: Bill’s guitar and Nathan’s banjo are joined over time by voice, piano, percussion, pump organ, electric organ and requinto, sketching, as they go, the richness and rusticity, traditionalism and open space of which the compositions dream.

For the session, Bill and Nathan pulled "I See God", from the traditional songbook of E.C. and Orna Ball of Rugby, VA. With pump organ approximating Orna's accordion, this music echoes into the 21st century with a yearning quality - sometimes melancholy, sometimes rambunctious. Bill and Nathan’s harmonies are devout in their raw-boned simplicity, finding something to believe in everything they see, as opposed to the limits and strictures cited by organized dogma.

While coming from traditional places, Nathan and Bill's "I See God" strikes sparks of inspiration to light the path forward. Go towards the light and while you're there: reserve your copy of Keys! Out April 9th.