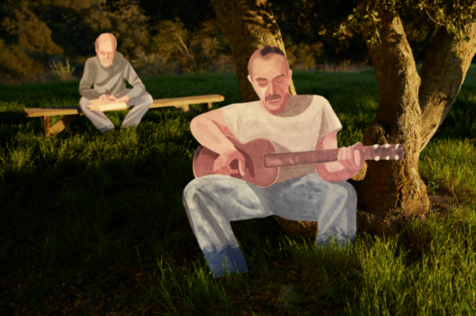 Last month, Matt Sweeney and Bonnie ‘Prince’ Billy announced their new album, Superwolves, out digitally April 30th and physically June 18th. Today, they release a new single “My Blue Suit,” with an accompanying video directed by Geoff McFetridge, and announce their first tour together since 2014. The tour will see the duo return to their ancestral lupine roots in Big Sur, the site of one of their first live performances, and beyond.

“My Blue Suit” follows previously released singles/videos “Make Worry For Me” and “Hall of Death.” Where “Hall of Death” featured a full band (courtesy of Tuareg guitar giant Mdou Moctar), “My Blue Suit” presents the duo at their core with Sweeney on acoustic guitar and Bonny (aka Will Oldham) on vocals. McFetridge elaborates on the video below:

"I started this video by painting. The work I created, in response to the song, was large scale figures I could use in scenes filmed on camera. All the images in the film are done in camera, there are no digital effects. The graphic sequences were done with paintings wrapped around a garbage can placed on a Techniques 1200 turntable. The tools used to create the effects were knives, glue, paint and tape.

The pieces created for the film are nearly life size portraits done with acrylic on paper. These works, the film and the animated elements will be shown in the project space of Cooper Cole Gallery in Toronto, opening May 1st."