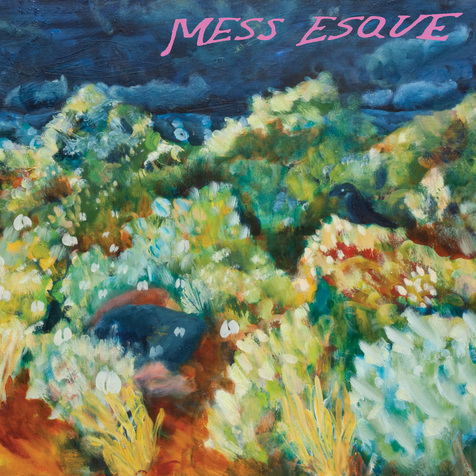 MESS ESQUE TAKE IT OUTSIDE

Just in time for the world that's coming are a bewitching new duo from Australia. Featuring music and instruments by Mick Turner and words and voice by Helen Franzmann, Mess Esque's debut album restlessly wanders through a series of intimate dialogues.

Helen lives in Brisbane; Mick in Melbourne. Mick’s played guitar for years, collaborating with loads of talented others; he's perhaps best known as one third of Dirty Three - though we know him as the visionary behind six or seven mostly instrumental releases for Drag City. His last record, 2013’s Don’t Tell the Driver, found him departing from his traditional hermetic template by employing a rhythm section and brass charts and collaborating with a vocalist, which clearly set the stage for Mess Esque.

In 2019, he was introduced to Helen through a mutual friend who’d produced the last McKisko album, the name Helen has worked under over the past 12 years, making records and touring regularly. With a plan to get together and make a record, they sent ideas back and forth - but when everything else happened instead, they continued to collaborate from a distance. In mutual isolation, a true correspondence took flight, electrifying in the air between them. Helen rode the drift of Mick’s tracks, a dazzling brew of guitars, organs, bass and drums. Her singing altered their meaning, which inspired Mick to make revisions, for Helen to respond to again. And so the music grew.

2021: the album’s done, they’ve made a band in the process, and Mick and Helen still haven’t met face-to-face! Listening to Mess Esque, you’d never know it. The lead single and video "Take it outside" is lively, exultant, with Helen’s double-tracked vocals multiplying the plaintive desire simmering in her words, as Mick’s organ chords radiate bursts of emotion over the song’s give-and-take rhythm shuffle.

Through a patient balance of improvisations and a focused pursuit of something that wasn't fully there at the start, Mess Esque have willed themselves and their world into verdant, lustrous being. "Take it outside" is the luscious first taste of their creation - the self titled full-length album will be ripe and ready on October 22nd, pre order your whole copy now!