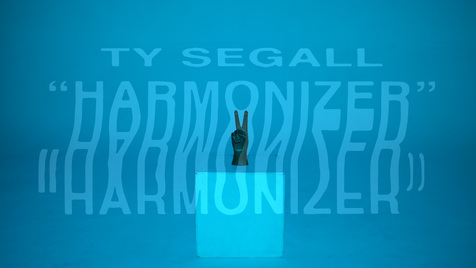 Ty Segall’s new album Harmonizer is a synthtastic production redesign and makes for some of his cleanest songs and starkest ideas to date. Bringing together booming drum machines and corrosive guitars, “the wonder of sound is baked into the album from the title down, be it twin leads or the multi-part vocal harmonies that coat every song” (Brooklyn Vegan). After surprise releasing the album last month via Drag City (the physical release is set for October) and sharing the video for “Feel Good,” Ty now releases a video for its title track. The vibrant “Harmonizer” video, directed by Ty and Denée Segall, filters between colorful stills of different objects and more chaotic clips, progressively becoming more strange and unsettling.

Harmonizer, co-produced by Cooper Crain, is the debut recording to be released from Ty’s just-completed Harmonizer Studios. The album features Denée, who co-wrote and appears on two tracks, plus the Freedom Band, comprised of Ben Boye, Mikal Cronin, Emmett Kelly, and Charles Moothart.

Last week, Ty Segall & the Freedom Band kicked off their North American tour. Following their two remaining shows at Los Angeles’ Teragram Ballroom, the band will continue to tour across California, including Moreno Valley’s Desert Daze and five consecutive dates in San Francisco around New Years. Next year they’ll play cities not yet visited on this run. Tickets for all dates are on sale now.