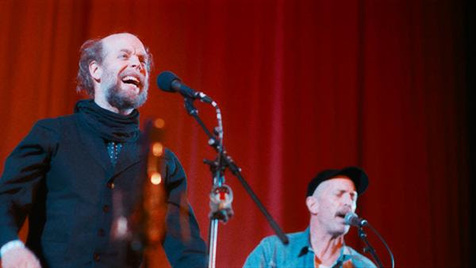 Captured at the Castro: "My Home is the Sea", is tried and true and now entirely new again! This live performance was snagged during the final leg of the Superwolves' 2021 West Coast tour at the legendary venue in San Francisco. Director Sai Selvarajan's camera floats surreptitiously between stage and crowd, like no drone ever could, highlighting the union between the two assemblies of humanity, which is good, for Superwolves go full-on gang-size onstage, joined by their brethren David Pajo and Emmett Kelly. Thus fortified, "My Home is The Sea" sails boldly where no "My Home Is the Sea" has gone before, into an open and fluid space Superwolves are always intent on visiting when in collaboration with those who've come to witness.

Glimpse into the maw! See something that resemble visions on the upcoming 'Wolves shows by watching "My Home is The Sea (Live)" above and get your tickets for the impending dates below!

*with Powers/Rolin Duo
^ with Caldwell/Tester
% with Sam Wagster
# with David Ferguson
& with Jacob Duncan
! with Sleep