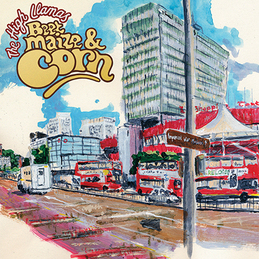 "I first heard The High Llamas' Beet, Maize and Corn after it flew into my mail box some time in 2003. (I'm not good with dates.) I remember falling in love with its simplicity and seeming austerity - after the gilded, rich albums they had made during the '90s, this was a quieter, statelier Llamas, painting from an autumn, auburn palette. They were now singing of the Walworth district, the Alexandra Line, the "˜Bridge Street step", and signing together, whether down the local or around Van Dyke Parks's piano. Jeremy Glogan's cover paintings reworked modernist architecture in an everyday manner, and made the Elephant & Castle romantic again, and the songs, shorn of all but the most essential arrangements, did the same for pop melody.

But this was also the first time I felt I got "inside" of what Sean O'Hagan and The High Llamas were really trying to do - all these beautiful arrangements, Carla Bley references, Impressionist touches etc in service to a humane vision of the song as a vessel for the quotidian. Here, O'Hagan sings of an England that's rooted in urban peregrination, folk unison singing; an honest record of his community. It's a profoundly moving experience to hear what a collective of artists can do when their eyes are open to the world on their doorstep, and these humble experiments, played and sung on a human scale, are among the bravest music made in modern times." - Jon Dale