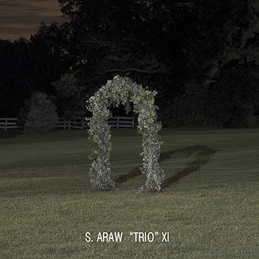 S. Araw "Trio" XI is a new configuration of the Sun Araw Band, the live-action collaborative branch of Sun Araw. Over the course of several studio dates in Hollywood, California, "Trio" players Cameron Stallones, Alex Gray, and Mitchell Brown (with no prior intentions of doing any such thing) successfully planted a garden of "non-dimensional" objects, not only spontaneously generating these objects but also mastering their nurture and cultivation.  And You Can Too!

Gazebo Effect is a 2xLP nocturnal stroll into the depths of the garden, its upper lawns and outbuildings. The listener is advised that as the objects have been "set growing" their location at any given time is difficult to predict. The Garden cannot be exited by the path it is entered, the angles involved being extremely precise. These factors (and others) clearly illustrate the value for oneself (and others) in the building of an observational structure: The Gazebo.  However, it must be understood that the presence of this structure has a transformative effect on The Garden Itself.

In other words, the "Gazebo Effect" is a music production system that allows a performance to be obstructed & (thus) interpreted while it is being played.  What a Savings!