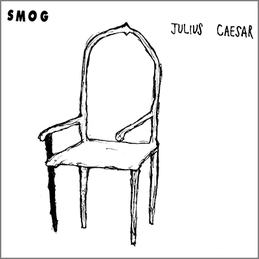 A balladeer, a buccaneer, a map that confirms "you are here!"

Out on the street, indie rock was an exciting way of life for boys and girls alike in the gay 90s. Here's a couple of voices from the fertile Denver scene, Lisa and Hilarie of Secret Square, picking a favorite from the Drag City young galaxy of stars. In addition to Secret Square, Hilarie played drums and sang for The Apples In Stereo and today plays and sings in The High Water Marks. Lisa played bass with Neutral Milk Hotel for a little while and later played guitar, sang and led the band Late Night in Los Angeles.

Lisa Janssen: Way back in 1993, I was working in a record store in Denver, CO. My employee pick of the month was Julius Caesar by Smog. I told the kids, BUY THIS, it's the GREATEST record EVER. I love it so much I'm going to MARRY IT. Raw, fragile, desperation, then triumph over desperation. Bill Callahan knew a special, secret language. My lecherous boss had the audacity to ask me, "What does he mean by "I am Star Wars Today?"

That winter a new girl, Hilarie, came to work at the store. She noticed my pick of the month, "I LOVE this record," says Hilarie. We were fast, best friends forever. She knew exactly what "I am Star Wars Today" meant.

Hilarie Sidney: I got a job at the local record store and was immediately impressed with Lisa's employee pick of the month, Julius Caesar. I was madly in love with the record. The punk rock boys we worked with sneered at our love of Julius Caesar, so we played it relentlessly. Lisa and I bonded over Smog, became best friends forever and started making our own music. We were no longer english grey.