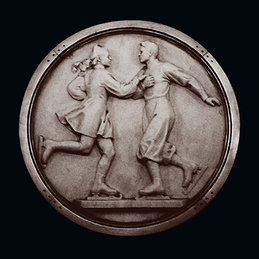 Live From A Shark Cage

Killer beauty, slowly circling animals & the heaviest, most deluxe vinyl to date. File with all your Aerial M records.

Writing a consideration of any portion of Pajo's voluminous catalog is quite the challenge. With the glaring exception of one rainbow colored cutout circa '03, it's been one love affair after the next for me and just about every record he's graced. Yet I find myself returning to make late night headphone excursions into the depths of Live From A Shark Cage on a regular basis, reliving my favorite moments like a ripe, juicy eructation of chili cheese fries in the middle of the night, or reveling as I have in the deja vu-like discovery of some clever plot twist unearthed for the Criterion edition of Brazil. The temptation is here to call it his Zoso, or even Who's Next, but that's unfair to all parties involved, and I'll leave such profane comparisons to the recently graduated music directors of college radio stations polluting the various interweb channels that pass for music journalism in this digital age we inhabit. Rather, Shark Cage deserves to be exalted in the same breath as Maggot Brain, The Payback, Stormcock or Miles' Pangea: modern masterpieces of minima built on subliminally insinuating rondos and vamps that echo not just Dave's own biorhythms, but a microcosmic take on the ur-pulse of the universe. In an era where the referential Lexicon shifts so rapidly that notions of classics and beau ideals scarcely linger as long as the sulfurous flatulence of your cubicle-mate, Shark Cage resounds as the beacon of fortitude in a sea of aural effluvia. If you are uninitiated, avail yourself. If you've been to the fountain, quench yourself again. - Bundy K. Brown