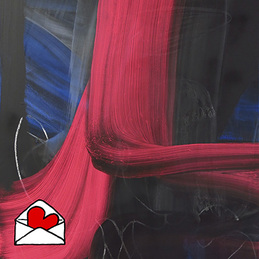 Matt Sweeney on this process: "One of the many beautiful things about the original 'OD’d In Denver' is the contrast between Hank Williams Junior’s effortless carefree vocal and the song’s bleak desperate words. So I thought I’d 'chop it up' and make the song’s music 'line up' with its lyrics by having minor key guitars percolate and arpeggiate, and singing an equally paranoid 'guide melody'. Then Greg Sweeney laced in his drum and percussion elements at his studio in Hoboken. Hank’s version’s narrator thinks he’s gotten over his night in Denver — I wanted this WillBilly track to feel like we’re catching our singer deep in the fear spiral."

This bed of music propels Callahan’s remorseless baritone to go deep on, tangled in the sheets with Billy’s haunted falsetto getting high — a spiraling stream of light and dark which communicates that disassociative ol’ post-OD emptiness to a T. Or a C.

Cover artwork by Rita Ackermann, shown at Soccer Club Club as a part of Jezebels, July 2016.