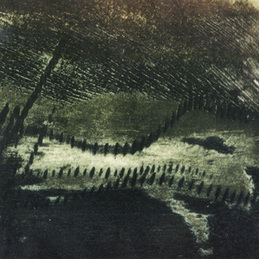 He walked on to the porch and stood still. He breathed in. It was young air, still and undisturbed. He looked out at the world- it was new and turning green. He raised his head. The sky unfolded, pink from the sun rising somewhere unseen. He raised his head higher. Spindle-shaped, porous clouds, centuries of laborious workmanship, stretched across the whole sky, but only for a few moments before dispersing, seen only by the few who happened to throw back their heads at that minute.

Originally released on LP in 1999