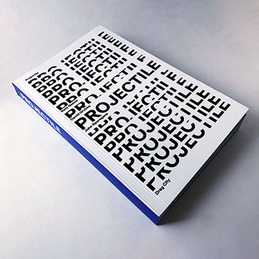 Projectile is an artist’s book by Reto Geiser, David Grubbs, and John Sparagana that spirals outward from a single source image: a news photograph of chair-throwing at the conclusion of a cancelled rock concert in the early 1980s. Visual artist John Sparagana has long produced sliced and mixed collage works in which a source image is enlarged, copies of the image sliced vertically into 1/8” strips and then sequenced horizontally, followed by a second stage in which the stretched image is sliced horizontally and sequenced vertically. The resulting works stutter, shimmer, extrapolate, and radiate with all manner of dazzling visual effects. Projectile deepens this engagement, with Geiser drawing from multiple works by Sparagana as a work of short fiction by musician and writer David Grubbs—a single 2,100-word sentence—wends its way through the entirety of the book.