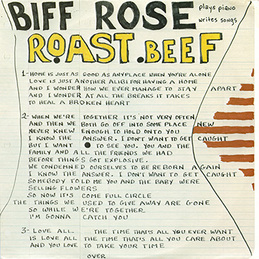 Roast Beef is Biff Rose's seventh album...financed by Michel Nesmith of the Monkees in 1976...made in ONE sitting straight through..it is the ONLY album ever to be made in ONE SITTING straight through (so Biff tells us!)...Biff decided to just improvise ..like you're on the ocean and suddenly there is an island...that would be a "song form"..then more oceanic improv..then ANOTHER firm island ( a song)..and so on for fourteen songs and one ocean...it is the LAST album to be made like that because now everyone is linkedIn,Tweeting. Texting and Techno...it is a collectors' item....Drag City is selling the remaining few original pressings in damn near perfect conditon, sealed...and ver-r-r-y rare Katrina survivors, with some subtle signs of the hurricane to prove it..... — Biff Rose