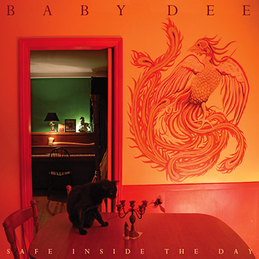 Safe Inside The Day

Dee filters old-world pop equally through her humor and tenderness on her first record for Drag City. Stories of childhood imagination are intercut with advice on abusing albinos and other oddities. Produced and featuring Will Oldham & Matt Sweeney.

I just listened to Baby Dee's Safe Inside The Day. It was probably the 50th time I've heard the album, and I should state upfront that I played bass and some drums on this record, and was fortunate enough to witness a great deal of the recording process thanks to Matt Sweeney, Will Oldham, and Dee herself. I've been even more fortunate to tour with Dee and play bass with her in concert. Still, even with my personal investment in this album, I feel I remain relatively objective about its quality. Safe Inside The Day absolutely contains some of my favorite musical moments by any artist, in any genre. It is superb.

I've tried many ways to describe the sound. It's the sound of hope- the sound of possibility- the sound of being alive- the sound of having gone through something. Dee has that elusive ability to create melodies which tap into the essence of feeling- the root of an emotion- the primary sensation of an experience. For me, that's when music is at its best: pure feeling which lies at the heart of every human being. Listen to the song, "You'll Find Your Footing" and tell me it's not one of the most beautiful melodies of all time. Music is at its most magical when you hear it for the first time and feel like you've known it forever. Baby Dee's is timeless music in the truest sense- not only in that it could've been written at any time, but in that it removes time entirely from the equation. This is music at its most musical. For example, "Flowers On The Tracks" says everything there is to say about love, loss, and life, and yet there isn't a single lyric in the entire composition.

Safe Inside The Day sets out to take the listener through the full range of what it is to be a person- the fear and the courage, the laughs and the tears, the joy and pain, but at the top of the Baby Dee pyramid there's something beyond all those feelings and it does not have a name (or does it?). It's a crowning combination of every feeling being felt as one, and lucky for you, that turns out to be the best feeling of all.
- Andrew W.K.