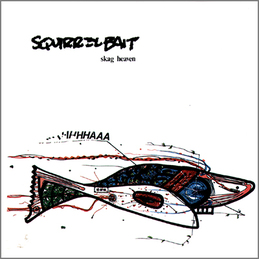 "I was gonna say something about how Skag Heaven was unfairly maligned at the time as pseudo-Husker Dude Music but that would be a lie. Fact is, people LOST THEIR SHIT when they heard these Louisville teens* for the first time and with good reason. They were melodic / anthemic enough to engage those without a passing interest in pre-punk, post-punk or punk in the present moment. The quintet was was inventive and near virtuoso enough that those who ordinarily didn't give a hoot about anything remotely tuneful, sat up and, well, acknowledged the tunes. That there's a grand canyon in quality when you compare the post-SB efforts of David, Clark, and Brian with those of Peter and Ben is ZERO reflection on how mind blowingly great Skag Heaven was. Do you wanna go to your grave having learned nothing about this fertile period in American rock history? Be my fucking guest, it's Drag City's problem!"
- Gerard Cosloy

*- this was another lie, by the way. We routinely fibbed about Squirrel Bait's respective ages in order to pique the curiosity of music journalists who leaned towards the chicken hawk side of things. A little trick we learned from Maurice Starr.

Skag Heaven topped everything to date with lyrical depth and dynamics. A cover of Phil Ochs' "Tape From California" informed for once and all that these were not garden-variety white trash youths (like Soul Asylum and all the subsequent Sub Pop shit).

LP released in 1986 on Homestead