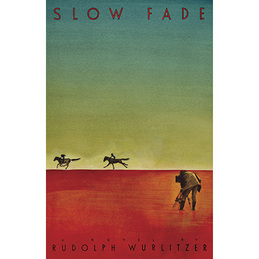 "The story alternates between [Wesley] Hardin in Santa Fe, Mexico, and New York — shooting a last-stand Western until the producer blows the whistle and shuts off the funds, generating a cinéma vérité chronicle of his own life — and A.D. and Walker writing their script on the road, so that each movement in the present is complemented by an additional piece of the past uncovered. Apart from generating a respectable amount of plot suspense, this narrative counterpoint allows Wurlitzer to pursue a satirical bent as he charts both fantasy trips, which becomes a contrast between the spiritual excesses of two generations: Yosemite Sam and Mr. Natural, each on a suicide mission.
— Jonathan Rosenbaum

Details on Audiobook version (on 5xCD or MP3/FLAC)
Bonny reads Rudy! Sung and unsung heroes sink in the sunset in this 1984 novel.
Read by Will Oldham with D.V. DeVincentis.
Audiobook was released 4/19/11