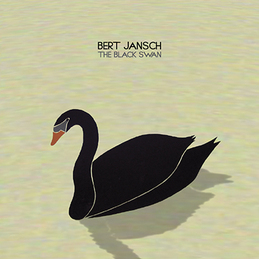 40 years into his career, Bert Jansch accepts those he's inspired (Here it's Devendra Banhart, Beth Orton, and members of Espers), while adding his signature guitar playing and croon. This is the sound of rejecting complacency.

It's been a big year for Bert Jansch, with the Famous Charisma Label reissues floating around out there and his relentless tours of the US in the company of some guy named Neil Young. We thought we'd cap it off with Item of the Week status for Bert's great The Black Swan album from 2006. Testifying for Bert is his producer on that occasion, Noah Georgeson. Noah's also worked on records by Mason Jennings, Little Joy, Devendra Banhart, Vetiver and some chick named Joanna Newsom. About Bert, Noah has this to say:

"Getting to work with Bert was like getting invited to the White House when you win the World Series, except I've never done the musical equivalent of winning the World Series, so I probably didn't deserve it. He's like an old-school head of state who demands real respect - not just because of what he's accomplished and what a legend he is and all that, but because of the way he carries himself. He has a bearing of great dignity, but you can also tell he's done more crazy stuff than all of your friends combined. The music on The Black Swan could only come from someone like that, and Bert might be the only person alive who has those qualities who happens to be one of the best guitar players ever. "