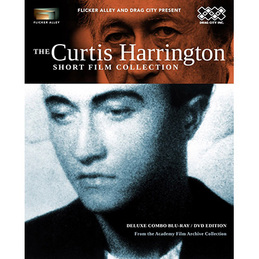 Curtis Harrington, widely regarded as one of the most important avant-garde directors of the 1940's, as well as an early influential figure in what would come to be known as "New Queer Cinema," was born in Los Angeles in 1926. He began making films as a teenager, often deeply surreal, intuitive, and owing much to the writings of Edgar Allan Poe. His unique career trajectory led him from the academic circles of cinematic criticism to Hollywood assistant, and to the famed film factory of cult icon Roger Corman, and on to a successful career of genre movie-making with Night Tide and Games, and commercial success in television. This publication, a joint effort between Flicker Alley and Drag City, features restorations carried out by the Academy Film Archive and is presented on a single disc Blu-ray/DVD combo. It comprises six short films by the late experimental filmmaker, as well as bonus interview footage and rarely-seen early works.