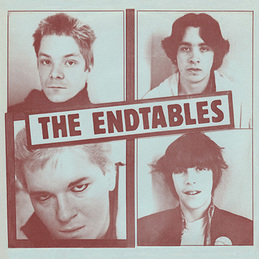 "I know that this one is hardly out of the new-release bins, but I'd like to lead one more chorus of hosannas for the reissue of the Endtables' self-titled EP. This is is a record that I haven't tired of- not a bit- in the 30 years since I first heard it. How is that possible? I'm afraid that the ability to explain such a thing is beyond my powers of analysis. For me, this will always be one of those perfect records (see also, from the DC-family catalog, Corky's Debt to His Father and the Circle X EP). It's the sound of the damn thing. It's the chilliness of Steve Rigot's vocals, and it's the wild, blazing interjections of Alex Durig's guitar playing.