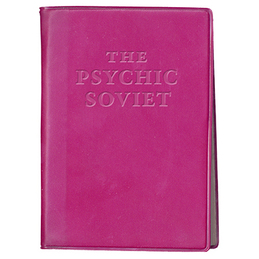 You might not guess it from this pocket-size (pink plastic covered!) book we've got for sale, but Ian has a lot to say. Funny... intelligent... concerned with both politics and music: all things you'd want in a mate, so why not in a book.

Called THE PSYCHIC SOVIET, after the central framing essay, it consists of both new articles and ones published previously in places like Index, BBGun, Dot Dot Dot, Sound Collector, Plan B and Weird War World, among others.

The essays, written in a scholarly yet engaging style, should clear up much of the prevailing confusion regarding events of the last millennium by exploring the use of rock 'n' roll and art by the ruling class, and the sinister machinations behind popular fiction, film, and television serials, among other cultural outlets.