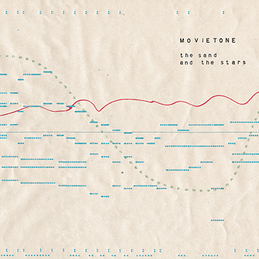 The Sand and the Stars

Partly recorded on a beach with two microphones, this beautiful album has the spirit of a field recording. A jazz record being played from across the bay.

Kate Wright of Movietone sings with one of the most English voices ever sent to tape. On 2003's "Beach Samba" she sings "theatre" with a RADA approved pronunciation of thee-eh-tah; the confidence in her quiet delivery given added resonance and strength by her Bristolian burr, recorded live on a two-track under the stars, on the beach at Porthcurno in Cornwall, "Beach Samba," brings us brass arrangements and a loping English sense of mystery.

These are pastoral sounds that resist the inflections of Celtic tunings or folkish tropes to record the landscape. Listening to Movietone, you can literally hear the waves. As a result, it has the startling authenticity of an autumnal walk along the beach, taking the British inner journey, so often an urban or suburban daydream, for a breath of fresh air.

Courtesy of Richard King and Caught By The River
http://caughtbytheriver.net