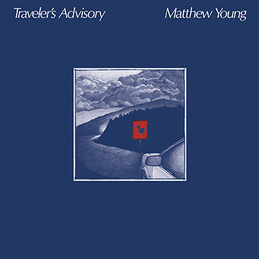 Mixing a hammered dulcimer & a drum machine makes no logical sense. Taking your lyrics from instruction manuals is not a good idea. Covering Michael Hurley in 1986 is about as out of step with the times as you can get. And yet... somehow this 25-year-old '12th-century/folk/electronic album' feels perfectly up to date and dare we say.... at least as cool as everything else on Drag City this year. Originally released in 1986 on Mt. Rose Records.

I was so, perhaps even embarrassingly so excited to hear that Drag City and Yoga reissued this 1986 private press recording. This lovely, strange and cerebral album from Hopewell, NJ comforts me in the same way that the memory of giant scientific calculators with leatherette zip cases and access to high-quality health insurance do. Just how are we going to calibrate for risk?

Traveler's Advisory makes quick work of kneejerk compulsions to distinguish between technology and handcrafted music. And the thoughtful hammer dulcimer and Casio instrumentation make a wonderful early example of a new kind of home studio parlor music. It's not social, but domestic and personal.

Over the past few years, I've taken the sight of this record kicking around a house as a key sign that it's truly ok to get comfortable. I am so happy to know that there are 500? 1000? or more safe spots like this out there.