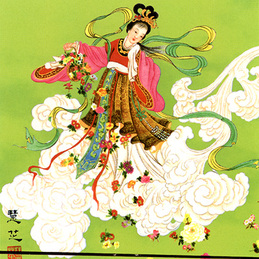 There must be something in that California water that makes everything so... new. Especially for crystal blue occasions.

When the untitled album dropped in early '96, some people in the international underground were aware of Cynthia Dall due to her contributions to Roller Derby magazine and her role in Smog, where she sang and played guitar on a couple records and a couple tours for a couple years leading up to her record. Yeah, people knew about her, but we didn't do them any favors putting out that record- it was completely untitled in every way! After a couple weeks in the marketplace, we had to have a sticker made just to help people see beyond the awesome cover to an album that was just about as ambitious as anything we'd done. The record went on to do pretty well, and Cynthia made a second album that came out in 2002 and she's still making new songs. What did she have to say when we called her and asked to talk about makin that good old album? Among other things, this:

"No one taught me how to sing with headphones on my head. I didn't learn how until that last tour in 2002.

Remember when Dan came over after we asked for more money for recording? He was like, "are you guys on heroin?" We were like, no we're just depressed. Dan K gave us his infamous look and said "Well okay..." That was a moment!

See Dan O and Dan K hadn't heard any of the songs! It was all on faith. Dan K had spoken to Mallon and he assured him it was gonna be good. Dan O told me he thought it would be pretty, but that it was just gonna be just, ukelele songs or something. Like, dee-dee-dee-dee-dee-dee-dee... They thought it was getting kind of expensive for like, a Juliana Hatfield-piece of bullshit. So they were very confused about it. Dan K was like, I'm gonna trust you on this. He was like, pull up your sleeves. And then when they got it, they were like, oh this is great.

And then came the moment when Jim came on board. But before that, the Tom Mallon who did all the American Music Club shit said something really rude to Bill. And I called the guy and said, "If you ever say anything approaching that..." well, I can't remember what I said I'd do. But after that, he straightened up. He did a really great job not just on the engineering, but also on not saying anything rude to Bill.

But Mallon was really offended when Jim was brought in at the last minute. Oh we had a great time! We slept in the studio...cause you know I get OCD. I was like, bring your sleeping bags cause we're gonna mix. That was great. And people wanted to drink beer and I was like oh, that's on you. I just think that's so lame, drinking and mixing. Jim had a little sticker on the board that said "Cindy Mute." Dan gave us 48 hours to finish. I thought we did a great mix.

Add Dan O helped out with the photo on the inner sleeve...it takes a village.

And by the way, Sound Restores Young Men is not shitty either and that Pitchfork man can shove it up his ass."