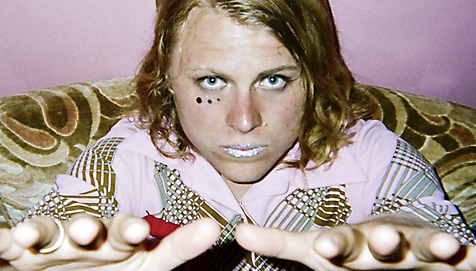 THUNDERSNOW IN DECEMBER? GET READY FOR THE SPACE-BLIZZARD OF OZ TO HIT DOWN UNDER

Falling down to Earth from the seedy innerbelly of Jupiter, the Ty Segall man, man, along with his Manipulator band, have slashed and shredded their way across America and Europe this fall, in support of their otherworldly double album. Since their planetary visas have a couple more weeks left on 'em before the band is rocked like vile, vile cargo back into outer-space, Ty and co. concurred - "let's take this mother down under!" Which raises the question - how do these freaks make it through airport security? Do they travel in their own, invisible vessel? A flying teapot, perhaps? We don't know for sure! The only thing that's certain, no matter how they get there, is what they'll do when they arrive: annihilate each and every night. Hopping into the 'roo pouch with propulsion drums on solid attack and pedals switched from "stun" to "melt," Ty and his MB force will boomerang their amplified fuzz blasts over an Australian audience ready and waiting for transportive, inter-stellar musics and energies surely unseen since the dawn of Goodbye Bread. Now THAT's a knife! It all starts next week in the land of Perth - catch the good comet Manipulator before it blazes to another dimension!

Back in the USSA: