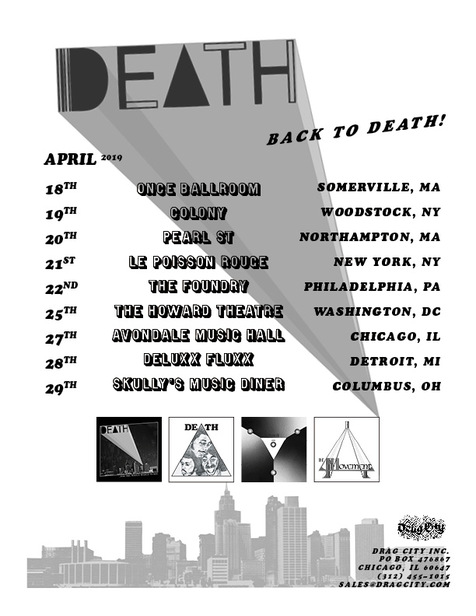 Death comes in many forms; with symbolic representations as the Grim Reaper, Azrael, the Hindu God Yama, Father Time and, of course, the world's first punk band! Originally made up of three African-American brothers, Detroit legends Death are returning to the touring circuit for the first time in years, hitting up cities they missed on their last jaunt...all in the name of celebration! It's been ten fucking years since Death arrived on the world stage with the archival release of ...For The Whole World To See! Mania ensued with copies being picked up by the truckload, their first ever tour, a late night TV appearance, a book, documentary and even an inclusion in the Smithsonian's National Museum of African American History and Culture! The band has come a long way since declining a potential record deal with Clive Davis in the 70s (because it meant changing their name) and are still knockin' nearly forty-five years later! Don't miss your chance to see these living legends in all of their glory, playing everything from the music that started their career to cuts off 2015's excellent N.E.W.!

Will there be more life after Death? Stay tuned and see!