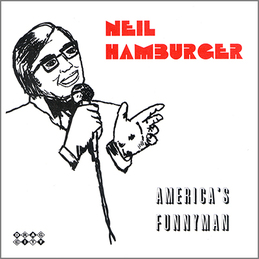 What can you say about Neil Hamburger? Laughter is clearly his life. Milk Magazine opines "Neil is the funny side of everyman, and everyman is just not that damn funny." Don't believe - em! You'll howl with laughter. Thurston Hunger of KFJC radio says, "This got funnier the more I listened to it." Us too.

America's Funnyman Neil Hamburger has changed a lot since his first album - for those of you who've enjoyed his classic comedy routines opening for Tim & Eric, Jake Austen recalls those young and innocent days:

"Before Drag City made him a phlegm-plagued, Fox News commenting, red carpet walking, hipster club touring, functioning rock star comic, Neil Hamburger was the Charlie Brown of comedy, answering the deafening silence of indifferent audiences and the indignities known only to 3rd tier pizzeria stand ups with poignant sighs. This album captures Neil at his profoundly pitiful peak before he sold out to the Chili Peppers fans by actually crafting hilarious jokes. "Sighs" matters."