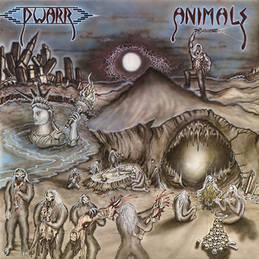 "I was working 12 hour shifts down at the sweat factory. One day, I was having a bad day and had a problem with one of the older guys. All of a sudden he pulled his packing knife out on me. I felt a rage running up through me and went running at him. He put the knife away very quickly. That night I had the dream for the title song ANIMALS. In the dream, I ate the human flesh, I crushed the human bone, I was an animal." -- Duane Warr

Originally released in 1986 on Brand X. This reissue is a co-production with Yoga Records.