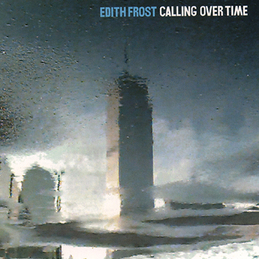 We put out some of my demos as a 2x7" EP, when was that? '94 or something? ('96 - ed.) I was still living in Brooklyn, working as a freelance HTMLer. I remember at one point calling Dan K on the phone to YELL at the poor man because it was taking so long for that EP to get released. I had no idea about all the things that have to happen before anything hits the streets. It did come out eventually though, and I thought "okay, I guess they weren't just yankin' my chain." Ha ha.

I suppose at some point you'd told me we might oughta think about doing an actual record in an actual studio with some people who could actually play. I was a little worried about what you had in mind, but I had already decided way before that, that you were a guy I was going to allow to help me out. I can be very very bullheaded Rian! You know this!! At the time I just could not imagine how this was going to turn out well. I could imagine LOTS of ways it could go horribly wrong, mainly that it would be too too boring and commercial-sounding. But it was a trust thing, I had to trust that you wouldn't fuck it up. You told me you'd asked these guys to play on the session you were putting together. They were from a little outfit called Gastr del Sol... I'd heard the name but not the music. You sent me a couple-three CDs and I listened, and was still quite dubious. I like it just fine but WHAT does this stuff have to do with MY music? Can these guys even play normal instruments, or is this just all cut together?

But then... oh I can't remember the sequence of events, but I went and saw Jim O'Rourke play live I think? And I was like... oh wow, I can get this dude to play whatever the fuck I want!! Not a problem! So by the time I actually flew to Chicago, I was no longer worried at all. Good thing. We sure had fun!! I was only there for like a week. I laughed so hard at all the gags you'd pull. When Dan K came in for a visit and teased you about your "producer shoes", pointed to a table covered in food wrappers and asked you to produce him a clean table. Rick Rizzo was playing bass, I didn't know Rick either back then. He kept saying "I'm not a bass player! I'm not! I'm just not!" More laughs. Shhhh Rick, you sound FINE, you're doing GREAT, it's OKAY! I remember when Jim was doing his fiddle part for oh, what song was it? "Temporary Loan." A tear came to my eye and when the tape stopped I yelled at him YOU SEE THIS? THIS IS A TEAR, JIM! I think you are headed in the right direction!

Another total kick about making this record was the fact that Sean O'Hagan happened to be in town; you were able to sweet-talk him into dropping by the studio to play some rollicking piano on at least one song which I can't remember. PONY SONG! "Pony Song." He sure can play. All those guys! Man! What was I thinking, ever being worried about THOSE guys messing up my precious rekkid? I am still to this day, so very proud of this album. Surely I'm biased, but it does not sound dated to me even now, and that's because there's no trickery, nothing that couldn't have been recorded just the same way 10 years earlier or later. Let's make this something we're not going to get sick of in a year. And now it's oh fuck!! FIFTEEN YEARS LATER? WHAT THE FUCK RIAN!!! Oh my god. Oh my god.

Anyway, it's still really good. I stand behind this message. I think everybody should just get out their credit cards, that's what I think. Ha.