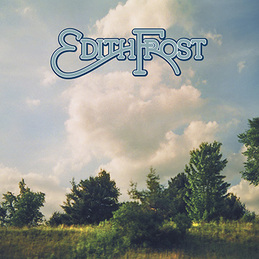 It must be time to breathe again! Edith's purty (irony, not illiteracy, people!) voice and wild lyrics cut to the truth of attraction, love lost, optimism and mistrust - truth seen clearly through a mellow haze of pure wonder.

Edith Frost fans out there probably have figured out that time moves extremely s l o w l y in Edith's musical world - this is how she's managed to make only two albums in the past twelve years! Back in 2000, Edith had piled up some new songs in the two years since Telescopic, so it was deemed time. I wanted to work at Electrical Audio with Steve Albini, with whom I'd had a gas making the Chestnut Station album and finishing the "All Most Heaven" EP. Basically, I was just looking for any excuse to hang out over there as much as I could, and this was the latest excuse. It was also an opportunity to tap lots of Chicago people I liked or liked working with, which included buddies of mine like Rick Rizzo, Mark Greenberg and Bill Lowman and buddies of Edith's like her bassist Ryan Hembrey and the amazing Amy Domingues on cello, as well as the young up-and-comer Glenn Kotche who was about to get super-busy with the Wilco. We set up in studio A with as many musicians live as possible - several guitars, basses, keys, cello, vibes and drums, if I recall correctly. The idea was to get a thick sound to start, then overdub where necessary. It was chaotic, which I enjoyed. I had fun informing everyone on the floor that we were doing "Cars and Parties" as a rocker and watching them tear up their self-written arrangements for the song as a ballad. It turned out nice, and so we came back a month later with Archer Prewitt to help with the finishing. Highlights included Mark flinging himself successfully at a set of tubular bells for "Cars and Parties" and Paul Mertens tearing through every part that Archer had prepared for him before we plied him with questions about playing with Brian Wilson. I also spent a memorable evening trying to get Kelly Hogan out of her house to come and sing with Archer and Edith, but it never did happen. Watching Steve down about half a dozen Krispy Kremes with a pint of coffee in about ten minutes has always stuck with me as well - as have the Krispy Kremes! Oh for a cleanse...

Of course, the primary thrill was being able to sit around while Edith recorded all her vocals. Plus, a week before the session, I challenged Edith to write two new songs (or "hits," as I called them) to add a fresh edge to the record. She sweated it out and actually managed to come up with two incredible songs - the title tracks to the record we were working on Wonder Wonder and her next record. It was proof to me that she was getting better and better as a songwriter - proof, unfortunately, that has become increasingly thin on the ground since then. I've got to remember to challenge her to write a few more hits!