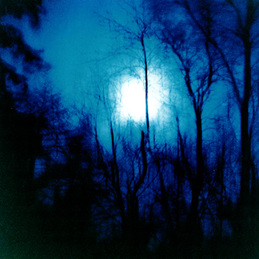 "On the list of undeservedly overlooked music of the last two decades, the recordings issued under the Flying Saucer Attack moniker should be near the top. While in hindsight one might conclude that these sounds were never destined to be ingested by a wide swath of music consumers, it certainly doesn't mean that that should have been the case. Just make a list of all of the "legendary" artists of yore contained within your ipod or droid and know that most if not all never sold shit during their artistic lifetimes. But are poor sales a positive reflection of the quality of any particular sounds? The answer is 'yes' in a surprising number of cases, reinforcing the idea that true genius is rarely appreciated in its own time, and so it is with FSA. They were certainly informed by the scriptures of Pink Floyd, Nick Drake, the early Creation label releases and Popol Vuh (they even named a two part instrumental after the last on their debut album). But FSA took the holy writs of these forebears as suggestions of possible paths to be further explored and not merely templates to be imitated, and thus created a wholly unique take on head music that they referenced as "rural psychedelia" on the jacket of the first album.

So take a flyer on their second proper album Further, as good as any place to start in their canon, and maybe the height of their "commercial" success, as limited as it may have been. Or you could just wait until Williamsburg collectively rediscovers the works of FSA and starts regurgitating them under new names and under new haircuts, and the kids can all, yet again, pretend the now breed are producing something original. I would suggest you buy this album instead."