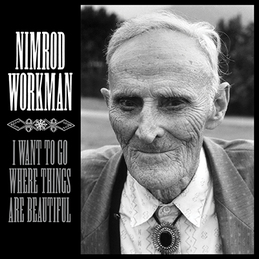 I Want To Go Where Things Are Beautiful

You may have seen Nimrod in Harlan County, USA when he was younger, fighting for the coal miner unions. These recordings, though, are from '82, when he was 5 years older than that, and make up his first LP release in 30 years. A fantastic example of an unmatched a cappella bluegrass vocalist and storyteller. Sure, he can be hard to understand, but that's where the joy comes from!

It might be hard to imagine now, but there were a few times and places in which protest songs had teeth. The spirituals of the Mobile marches, boycotts, and sit-ins of the Civil Rights movement come to mind, as do the work songs and hollers of the Southern prison farms, born in slavery yet easily adapted to the similar conditions of the penitentiaries."If I Had A Hammer," they weren't, and if they didn't beat the system, they at least kept the singers from getting beat by it. The union drives in Appalachia's coal fields also spawned a slim but potent body of protest songs, by far the most famous of which was Florence Reece's "Which Side Are You On." A miner's daughter (and later a miner's wife) wrote it at the tender age of 12, and it's since been flung far and wide, across regional, occupational, and topical lines. Kentucky's Aunt Molly Jackson and Sarah Ogan Gunning and West Virginia's Hazel Dickens, who recently passed on, were also kin to miners, and made lasting contributions and did arguable good with songs like "I Love Coal Miners, I Do," "I Hate the Capitalist System," and "They'll Never Keep Us Down."

But among the sharpest stuff in the tradition was dragged out of the pits by Nimrod Workman, one of America's foremost miner-composers, and the subject of I Want To Go Where Things Are Beautiful. Nimrod sang like he was hoisting his songs up through chunks of slate and shards of glass, and with the black lung that was his inheritance from 42 years underground in Kentucky and West Virginia mines, that might well have been how it felt. Not that he showed weakness, or in fact the slightest outward sign of any repressibility: the father of thirteen children and progenitor of countless grandchildren and great-grandchildren, Nimrod was 88 when recorded his compositions "42 Years" and "Coal Black Mining Blues" for folklorist Mike Seeger in 1982, with all the piss and vinegar of the feisty young man who reportedly marched with Mother Jones at the Battle of Blair Mountain in 1931. "Been everything in the union", he recalled in 1978. "I was organizer, I helped get it, I lived to it, when there was a strike we didn't go back in till we got what we wanted. I been union for a long time but I never forget what it said and what it meant".

It's admittedly hard to imagine Nimrod screeching out his unaccompanied topical ballads and lyrics at the head of the picket line, much less getting the union brotherhood to join in, but that's not to say his particular quiver of protest songs, what they said, and what they meant didn't have a role in very real events. As he recalls to Mike Seeger in these recordings, "I'd be in [the mine] by myself, couldn't hear nobody nowhere. Just nothing but me and my light, in that dark place. I'd be a loading my car, and I'd sing till I get it loaded". His songs kept him from sinking into loneliness or, worse, despair, and they expressed the essence of not only his occupational experience, but also his social, political, and religious identity. One of Nimrod's proudest moments came in the mid-1960s when he, along with a contingent of West Virginia miners, traveled to DC to lobby their senator Fiddlin' Robert Byrd for black lung compensation. "I was fightin' like a snake for it," he remembered, and he composed "42 Years" in direct response to the coal bosses' denials of the disease. Byrd ultimately caved, and, in spite of the howls of the powerful coal companies, Nimrod and his fellow miners received their compensation.

They don't make songs like Nimrod's anymore, and they certainly don't make singers like him, but his contributions endure like he endured - despite the stiffest odds, the tough old rascal died at 99. We're confident his songs will last a whole lot longer"
-Nathan Salsburg