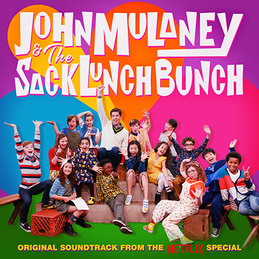 I’m John Mulaney and I am a 37 year old man. The Sack Lunch Bunch is a group of children ages 8–13 who are more talented than me.  In this special, we are joined by celebrity guests like David Byrne, Tony Award Winner Andre De Shields, Natasha Lyonne, Annaleigh Ashford, Richard Kind, and Jake Gyllenhaal from the movie Zodiac. The result is a collage of Broadway caliber showstoppers, comedy sketches for all ages, meditations on life from children and adults, and a papier mache volcano. It’s funny, musical, joyous, anxious, and surprisingly profound.

The LP is packaged SUPER-deluxe with a gatefold sleeve including all the lyrics and lots of photos, plus a peelable colorform image on the cover! Album release date is July 24th.