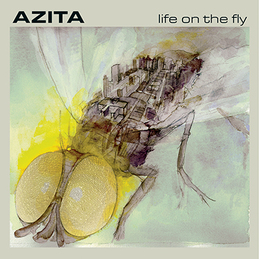 Life On The Fly

This your ticket: free entry, backstage, VIP. It's your life explained, amplified in the vicinity of your existence, reduced to riding a garbage eating insect while just trying to make it happen. Sift through it; dig its filthy beauty.

i spent a nervous amount of time listening and learning the guitar parts on this album. i had never been hired to be a guitar player for anyone on the road before. all i knew was Azita was in charge. this, as it would be for i'm sure a fair amount of people, was a scary thought. because i had had a conversation with her before this engagement, and i knew that if anything, this woman knows exactly what she wants. exactly. down to the smallest detail. and i would learn about it further in rehearsals leading up the gigs. where the drum fills would go, the bass lines would go, and me, all thumbs, "here's where the big epic guitar solo is," she says.. o shit. solo? at any rate. as good or whatever the gigs ended up being were, that shit kicked my ass.