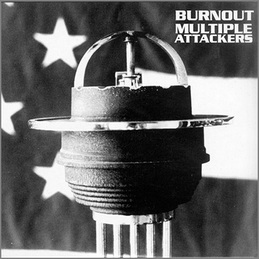 Heatseekers with street smarts, these bad boys will break and enter your hearts. Convicted on four counts of rocking out.

Let's pretend Drag City never released Burnout's "Multiple Attackers." Now imagine some tapes discovered in a storeroom behind the National City Bank in a Wicker Park stripmall once housing the original Idful Studios. A CD-R made from those tapes is stuffed inside our P.O. Box, and as we listen to the six songs on this EP, we become convinced that the world must hear the truth of the rock reality that existed on the independent level beneath the prevailing mythos of grunge circa '93-'94! I guess we should also suppose that Drag City never did Burnout's "Lounge" 7"EP either, because otherwise we'd already be familiar with the band. But then do we also forget that we saw them perform a bunch of outstanding shows around town back in the early 90s? It doesn't seem fair to have to forget that and we can't, so don't you try to either.