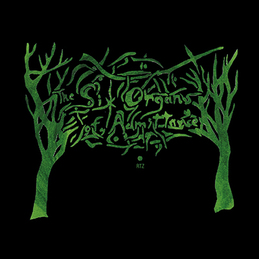 Three black slabs or two shiny discs? That's the only question that needs to be answered. A culmination of the rarest (in the meat sense) tracks from the early days of Ben Chasny. Songs for the wilderness - caves, mountains, forests, rivers - tweaked beyond bliss. As a bonus, one whole side of this is unreleased, never-before- tasted jams.

Every once in awhile on the good ship Drag city, we open the hatch so that we can hear the sounds of our laborers as they go about their daily servitude. Who knows, we might even learn something! Today, we've done ourselves a solid by listening to the wailings of our international man of sales, Brett Sova:

"The sounds, songs and passages of RTZ are mesmerizing: engaging to the point of obsession, they are dense, panoramic oceans upon which I voyage with each listen. Plain evidence of the Six Organs Of Admittance total-vision.

We know that Chasny named RTZ after the useful rewind button - stands for 'Return To Zero' - that makes it easier to record, edit and overdub by memorizing a specific reference point while recording on 4-track cassette tape. Based on the album's elegance, the way that songs such as 'You Can Always See The Sun' enchant and mystify with subtle ease, I can't help but imagine that the RTZ button on Chasny's 4-track is likely pushed an inch or so into the machine and encrusted with blood.

Upon hearing RTZ, anyone who has spent any time with a 4-track recording device will recognize its achievement. Those who haven't must understand how massively impressive this triple-album is. When recording in this fashion, even if for reasons financial rather than aesthetic, it's often the artist's goal to make music that is both intimate and timeless. Something that makes the listener feel as though they're peaking into the performer's bedroom window, but also sounds good enough to defy any fidelity limitations with music and performance that appeals to all who hear it, whenever and wherever they hear it. RTZ executes these two objectives flawlessly, in such a way that insists the entire planetary village must be right outside Chasny's cabin window."